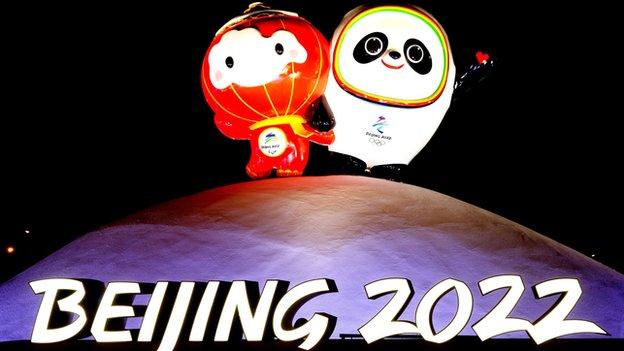 Both teams are yet to be finalised but more than 70 Team GB and ParalympicsGB athletes are set to compete in China.

The Winter Olympics will take place from 4-20 February, while the Winter Paralympics will be from 4-13 March.

If Team GB were to reach the upper end of the target, it would represent a record medal haul, beating the five medals won at the 2014 and 2018 Games.

Medal hopes will include snowboarders Charlotte Bankes and Katie Ormerod, bobsledders Brad Hall and Mica McNeill, and skeleton’s Marcus Wyatt, who have all achieved World Cup podiums this season.

In addition, Bruce Mouat and Jen Dodds will enter the mixed doubles curling competition as reigning world champions and Eve Muirhead will hope to win a second Olympic medal as she leads GB’s women’s curling team at a fourth Games.

Of the challenges faced in planning for the Games, Munday added: “We acknowledge that getting to Beijing has been extraordinarily challenging. British winter athletes have had to adapt and show great resilience and dedication to get to the Games and we are immensely proud of them.

“I would also like to commend the fantastic work that the British Olympic Association (BOA) and British Paralympic Association have done in getting their teams ready for Beijing as well as the coaches and support staff at the winter sports.”

Meanwhile, an international athlete-led movement has said the International Olympic Committee (IOC) is “placing the safety and wellbeing of every athlete at risk” through its staging of the Winter Olympics and Winter Paralympics in China.

The US, UK, Australia and Canada will not send government representatives to the Games because of concerns over China’s human rights record.

“Over the past two years, Covid-19 has taken lives, disrupted sport, sidelined athletes, and made the playing field unequal,” said Global Athlete.

“This unpredictability has strained athletes, and the new Omicron variant has made the situation worse. Athletes who continue to compete and travel are at a higher risk of infection than ever before.

“In addition to the stress of Covid-19, the IOC awarded the Games to China, a country recognised internationally for its human rights violations.

“This unfairly makes athletes pawns in a geopolitical fight. The IOC is to blame for putting athletes in this position; no athlete can be faulted for their choice to attend or not attend the Games.

“With no guaranteed protection by the IOC or the Chinese authorities, we strongly advise athletes not to speak up about human rights issues while in China.”

The BBC has approached the IOC for comment regarding the statement from Global Athlete.

Andy Anson, chief executive of the BOA, said athletes must be “sensible” and will not be stopped from expressing their views but said they should seek advice from the BOA.

“It is a fine balance but we are not the ones who are going to stop our athletes expressing themselves at any point.

“This is their one opportunity in their life to really have the platform. We are supportive of the athletes and we will help them and guide them along the way.”

Austria tweaks vaccine mandate plan, to come in next month

How Being a Parent Heightens Happy Moments

Ashes: Ex-England players, pundits and fans react to another collapse